Drunkard, ill-fated lover, silhouette amid shapes of the real, Paul Verlaine pitched headlong across what he calls ‘a new oblivion’ (29). The Symbolist poet embarked on a series of famously doomed love affairs, spent time abroad (including a couple of years in a Belgian prison), and lived the last part of his life in an absinthe fug, wandering the Paris slums; he died a relatively young man at 51 years. This book, Songs Without Words, is poet and translator Donald Revell’s sixth translated work of 19th century French verse; these English-language versions are (after Dryden) paraphrased echoes of the poems Verlaine made while imprisoned after shooting at (and slightly injuring) his young lover and proto-arriviste, Rimbaud, in a jealous and drunken rage.

Verlaine lived a large but impoverished life, partied hard indeed, then expired: he leaves a considerable mythology, some of which is captured by the reverential tone in the translator’s preface—

In his essay ‘The Task of the Translator’, Walter Benjamin also speculates on purity, and avows that a pure language exists abstractly and ‘no longer means or expresses anything but is, as expressionless and creative Word, that which is meant in all languages’ (80). This is more than what Verlaine’s contemporary and colleague Mallarmé would designate as a function for poets (whom, he felt, would purify the dialect of the tribe); Benjamin posits a meta-language to contain all possible expressions of nuance, gesture, and trope echoing inside each living language. The task of the translator is to shift toward trans-linguistic universalism: no poet and no language is hermetic, and all remain ‘interrelated in what they want to express’ (Benjamin 74). What Verlaine expresses in these texts – so skillfully transferred by Revell—is an often-wrenching cri de coeur situating a continuum of affectivity, from the mad swirl of reality—

Round and go round! Ever so slowly
The velvet of heaven is strewn with stars.
The lovers drift away. The horses keep going
In the bliss of abandonment, their song without words (55)

to the lovelorn keening for a connection that has been lost—

The waxy picturesque goes on forever.
But you, you were real. Nothing else matters. (79)

These biographical sketches reaffirm the lore of an often out-of-control poet, hungry with desire for the satiation of authenticity; within the realm of appearances in which the poet gambols, carols, prances and plays (he at one point suggests, ‘Let’s be children, let’s be little girls’) (29), there are moments of weirdly ecstatic gloom—

Oh traveler, this fading picturesque
Mirrors death.
And overhead, in the drowning branches,
All hope dies. (41)

In attempting to transmit pan-cultural affect into particular linguistic echoes, in his book One Hundred and One Poems by Paul Verlaine (1999), Norman Shapiro locates the following language to express the Symbolist’s same stanza—

How often, traveler, have you seen your blear
Image reflected in life’s drear,
Bleak scene, while high above, midst bough and leaf,
Your drowned hopes, wailful, weep their grief! (89)

If, after Alexander Pope’s fiat, issued in the early 18th century, we can agree that indeed, ‘The sound must seem an echo to the sense’ (Pope), then what is happening to Verlaine’s sense-making, transmuted elsewhere into—

How wan the face, O traveller, this wan
Gray landscape looked upon;
And how forlornly in the high tree-tops
Lamented thy drowned hopes!
(Bernstein 1947)

There are magnitudes of prosodic—and therein, affective—difference here, and these three iterations exemplify the call poet-translators have made across the 20th century: Bonnefoy, Valery, Paz (among others) each avow translations of poems are at best only ever variations; Scottish poet Don Paterson frames it as follows: ‘one can no more translate a poem than one can a piece of music’ (77). In his essay, ‘The Preface to Ovid’s Epistles’ (1680), which essentially founds Translation Studies, John Dryden enumerates three modes of translation practice—

First, that of metaphrase, or turning author word by word, and line by line … The second way is that of paraphrase, or translation with latitude … The Third way is that of Imitation, where the Translator (if now he has not lost that Name) assumes the liberty not only to vary from the words and sense, but to forsake them both as he sees occasion: and taking only some general hints from the Original, to run division on the ground-work, as he pleases. (17)

Revell’s strength is that he shifts somewhere between Dryden’s second and third principles, and his texts make interpretative, imitative sense of Verlaine’s desperate, affective, ontological manouvres. Rather than attempt (the impossible task of) equivalence, this translator’s faithfulness is instead toward making poems that echo distantly rather than closely resembling the syntax of the source. As a poet, one assumes Revell understands language can stretch and shift into musical investigation of those spaces where ‘air is screaming’ (47); the same line is transmuted by Shapiro as, ‘That whir?/ Like sistrum sounding’ (93). While for some translators the relationship between source and target can best be framed as parasitic, the poems in Revell’s Songs without Words are indeed poems in their own right: compressed, precise, wild propositions which, as Seamus Heaney avows of all poems, successfully knock language—and therein accustomed modes of perception—sideward.

Benjamin, Walter (trans. Harry Zohn) ‘The Task of the Translator’. Theories of Translation: An Anthology of Essays from Dryden to Derrida. Ed. Rainer Schulte and John Biguenet. Chicago and London: The University of Chicago Press, 1992. Print. 71-82.

Dryden, John. ‘On Translation’. Theories of Translation: An Anthology of Essays from Dryden to Derrida. Ed. Rainer Schulte and John Biguenet. Chicago and London: The University of Chicago Press, 1992. Print. 17-31.

Shapiro, Norman B. One Hundred and One Poems by Paul Verlaine. Chicago; London: The University of Chicago Press, 1999. Print.
Posted by Verse at 1:00 AM No comments:
Email ThisBlogThis!Share to TwitterShare to FacebookShare to Pinterest

The new issue of Verse is out and includes portfolios by 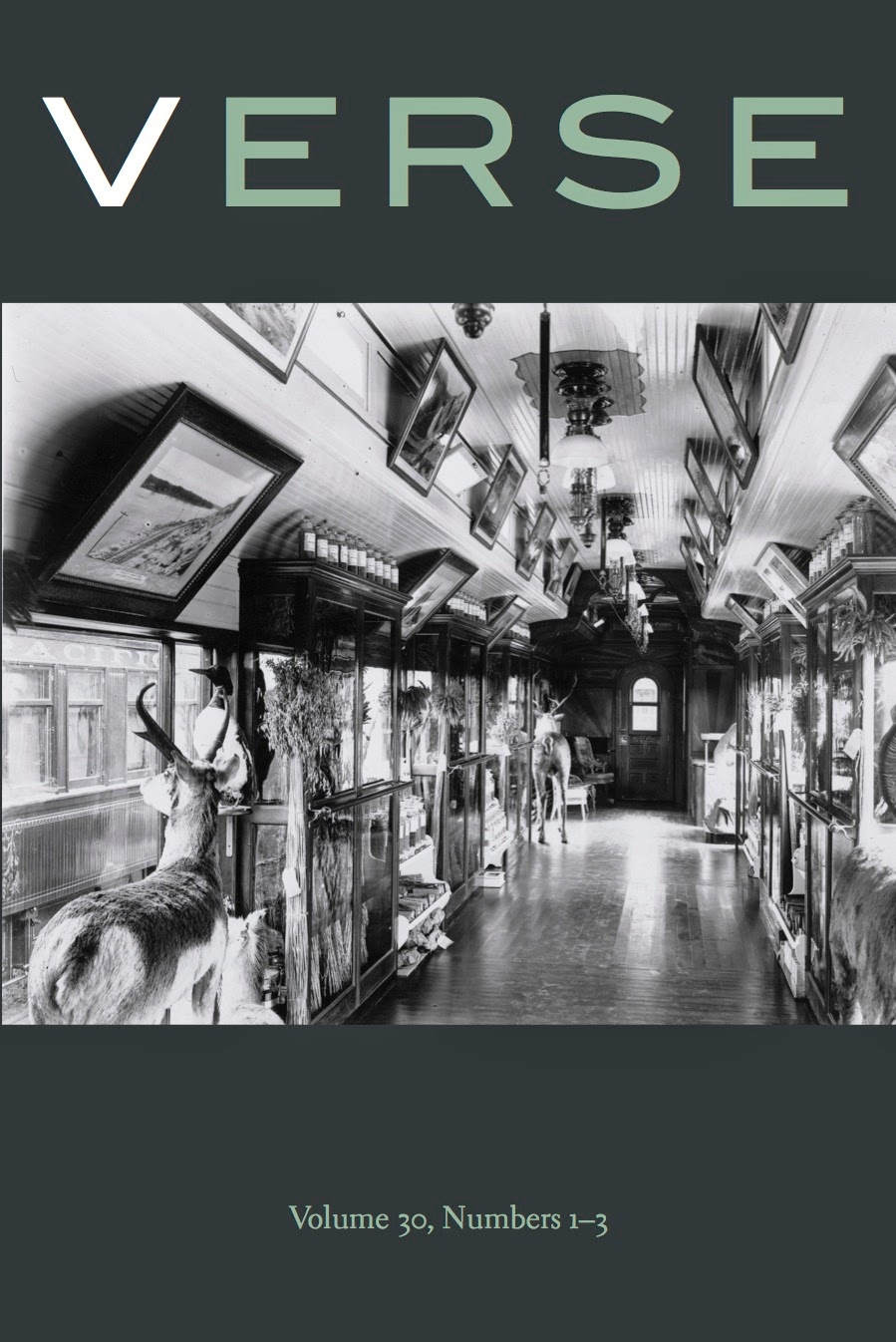 The issue costs $15 and can be ordered from the Verse office: English Department, University of Richmond, Richmond, VA 23173.